Learn how to teach English while loving Thai culture.

Gain great experience teaching English as a foreign language (TEFL) while living in vibrant Chiang Mai, Thailand during the summer! Observe other TEFL teachers, enjoy insights from mentors, and even take the lead as teacher when you’re prepared for it. To complement your in-classroom experience, you’ll also take online TEFL courses to earn a TEFL certificate and credentials to land a paid job! Rounding out this comprehensive hybrid online/in-person TEFL course are excursions, social and cultural activities, housing, staff support, and professional development.

Sign up to learn more about programs in Thailand!

You’ll be learning how to teach English abroad, increasing your career utility and creating more opportunities for you to work abroad in the future. Throughout your time in Thailand, you’ll have a flexible study schedule to complete your comprehensive training modules. And the TEFL course works on any device!

This is more than a TEFL course experience! As well as participate in CIS Abroad excursions, you’ll shadow teachers in Thailand to learn what their day-to-day is like. You’ll also have a chance to meet expats that now live in Thailand to teach English, giving you some insights into how and why they made that move.

The following is a tentative itinerary, subject to change but meant to give you an idea of how your time will generally be spent. 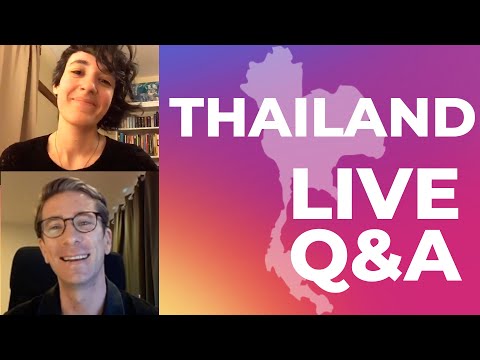 Why Life in Chiang Mai

Known to Thais as the “Rose of the North,” Chiang Mai is a breathtaking city surrounded by mountains and bisected by the Ping River. Visitors flock to experience the cosmopolitan atmosphere and delicious food unique to the region, and to venture out into the imposing mountains. The city resides on an elevated plateau approximately 1,000 feet above sea level.

Recently voted the world’s second-best city, Chiang Mai has a rich history and culture. Chiang Mai is home to 150,000 people, with a greater metropolitan population of around one million. This city has 700 years of ancient history and was a prominent place as the heart of Lanna culture. The fortressed Old City center was the former capital of the Lanna kingdom. This is one of the few cities in the world that still features an intact moat, which encircles the Old City. You’ll notice that the common mode of transport is to ride a songtaew (pronounced “song- tau”), or red truck-taxi. You’ll feel like a local as you zip around the streets.

Students will live in double rooms in centrally-located hotel-style apartments. Among the amenities are TV, air conditioning, Wifi, and a small refrigerator.

Check out the photo gallery to get an idea of what the apartments are like.

The apartments have kitchens where you can cook your own meals.

Upon arrival you’ll take part in a comprehensive orientation program. You’ll learn the “do’s and don’ts” of living in Chiang Mai. Where to go out, how to stay safe, where the shops and markets are, how to get around, and the likes will be among the topics covered in our orientation. In the afternoon you will participate in the Thai Cultural values training, where staff will cover the differences in working and communication style between Thailand and the West.

At the end of the program we will all get together for one last epic meal and talk about your adventures and experiences. Our staff will also share some precious tips on going back home feeling like a champ! Your study abroad experience is something to be cherished and shared with your family and friends back home.

This 2 day trip to Bangkok covers both the old and new City of Angels. See the center of Bangkok’s massive Chinatown, visit the Temple of a 5 ton golden buddha that was lost for almost 200 years, experience the center of bustling metropolitan Bangkok, and much more!

CISabroad participants will enjoy a day of friendly appreciation of elephants at one of Thailand’s most respected elephant sanctuaries. You’ll learn about the sanctuary’s role in the protection of these great creatures, and maybe even get to take a swim with them!

During this excursion you will learn all about Thai fruits, vegetable, and herbs, visit the market and learn about the different ingredients and then make 5 dishes of your own from scratch.

David was born in the UK and moved to the US when he was 16 and completed high school and University in Colorado. As an avid traveler, his first thought on graduation was to travel to Asia. He volunteered and lived with a family in Kathmandu for 2 months before traveling to Thailand. He quickly fell in love with the country and for the last 12 years has worked as a teacher, as a development officer in NGOs, and has worked with volunteers and study abroad programs for the last seven years. He has an MA in Asia Pacific Studies and is fluent in Thai. He loves his work because it allows him to share his love of Thailand and its people with participants and at the same time support the great things that people all over Thailand are doing every day.

You’ll be supported every step of the way!

Our advising team will help match you with a program that fits your academic and personal needs. Once you have selected your program our advisor will help you complete your Online Application.

Once you’ve started your application and submitted the $90 deposit, you’ll be assigned a program enrollment coordinator who will guide you through the enrollment process to get you abroad!

Expect the unexpected! Sometimes culture shock is stronger in countries where you expect things to be more similar to your home country and environment. Traveling abroad is an excellent way to learn more about your own culture, habits, style, and adaptability.

We believe that study abroad is still possible during the COVID-19 pandemic, but certain policies and procedures will need to be in place to ensure every student can be safe and healthy during their semester abroad.

Read more below for information related to this program:

We monitor international indicators and health standards in the country where we operate and our risk management team makes decisions based on those factors and our own policy. We will reopen programs as we are able.