Learn from a renowned, international professor

Immerse yourself in experiential learning

In the Mediterranean, food is more a window into the local culture than a tool for survival. Study how, when and what locals eat in Barcelona, Rome, and Athens. Study the business behind the industries of food production and exportation, the nutritional elements behind the Mediterranean diet, and take home some recipes for a lifetime of cooking. Courses are taught in English, but students are highly encouraged to practice their Spanish, Italian, and Greek language skills outside of the classroom to truly get the most out of the experience.

At Barcelona School for International Studies (SIS), you’ll enjoy innovative courses in the heart of the vibrant, playful city of Barcelona. The city center is just a ten-minute walk from campus. SIS prides itself on offering unique curriculum, allowing you to fulfill courses in languages, culture, history, art, and the humanities. At SIS, you can immerse yourself in the local culture, make Spanish and international friends, and have easy access to all that Barcelona has to offer.

SIS shares its facility with a renowned language school, providing you with the opportunity to meet students from around the world. The campus is located in the Eixample district of the city, where many of Barcelona’s distinct neighborhoods are just a walk away, including the old city, La Rambla, and the Barceloneta beach.

The program focuses on immersion in the Spanish language, but mostly offers classes taught in English. Your diverse international professors are all highly qualified, and they are used to adapting their courses for study abroad students. You’ll get to enjoy the use of spacious classrooms, multimedia equipment, and other modern amenities during your time in Barcelona. Students receive three credits from our School of Record, Jacksonville University in Florida.

All students take Food, Culture, and Society in the Mediterranean Basin.

Life in Barcelona, Rome, and Athens

Why Barcelona, Rome, and Athens

Barcelona also enjoys a bit of Roman heritage, most evident in its languages (both “Castilian” Spanish and Catalan) and architecture. A large and vibrant metropolis with a rich and alluring culture, Barcelona is anything but a sleepy seaside city. Tourists and locals alike adore the social and artistic buzz that permeates Barcelona – in its plentiful plazas, boardwalks, distinct neighborhoods, funky architecture, and pristine beaches. The second-largest city in Spain, Barcelona is unique in that it blends the bustling nature of a large city with an emphasis on the “life” side of “work-life” balance (the beaches probably don’t hurt in that regard…)

Considered the “Eternal City,” Rome blends an exceptionally rich history with a vibrant contemporary culture. Revered equally by history buffs, culture vultures, and foodies, Rome has something (or more accurately, tons!) for everybody. There’s no shortage of art galleries, museums, ruins, and gastronomic exploits (e.g. gelato) to make the most of your time. And don’t forget to make time for general idling, people-watching, and exploring Rome’s diverse neighborhoods.

Athens has the third largest port in the world, allowing visitors to flock to the city by sea. The flourishing population of approximately 660,000 people makes Athens a bustling, cosmopolitan city. You’ll notice a vibrant street life combined with a relaxed culture. As you explore, you’ll discover the true spirit of the city in the surrounding neighborhoods, which all have lively music, food, and people.

Housing in Barcelona, Rome, and Athens

Students will live in shared rooms in centrally-located apartments, hotels or upscale hostels in each city (Barcelona, Rome & Athens). Exact housing allocations are shared with students a few weeks before arriving on-site.

Check out the photo gallery to see examples of housing that we’ve used before.

Meals are not included but students will have access either to a kitchen or affordable alternatives. With local cuisine taking center stage during this program, why not try your hand at preparing your own fresh dishes?

The Basílica i Temple Expiatori de la Sagrada Família is a large unfinished Roman Catholic church in Barcelona, designed by Catalan architect Antoni Gaudí. Construction started in 1882 and is still going on to this day. 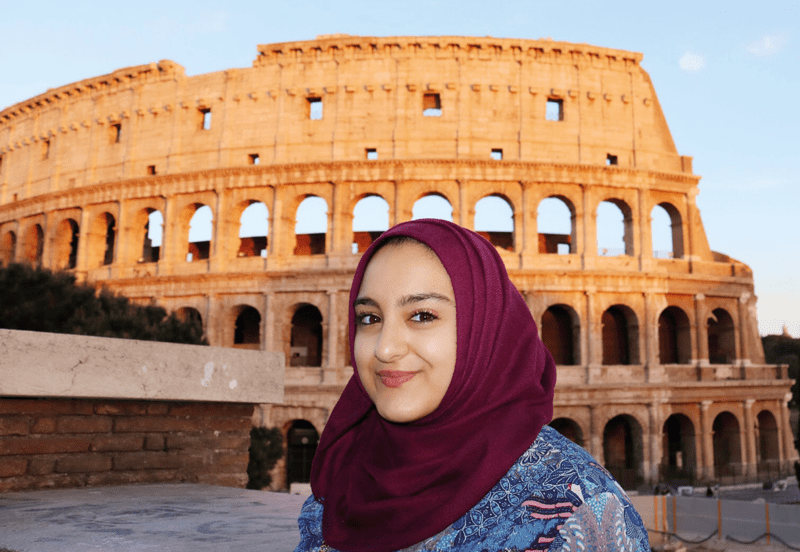 Wander about one of the world’s most infamous architectural sites, the Colosseum. No visit to Rome is complete without touring the Flavian Amphitheatre where gladiators and animals fought as entertainment for ancient, imperial Rome. The nearby Imperial Forums will impress you with their monumental remains. Make a visit to the sacred rock of the Acropolis, where you can admire architectural treasures dating from the 5th century BC.

Travel Tip: Travelling isn’t just about seeing new places and photographing their monuments, museums, food and landscapes. Travelling isn’t about knowing new cultures and people to label and judge them. Travelling is about allowing ourselves to experience with all our senses and open our mind, letting what we see sink in so that we can reflect on it and learn in a much more conscious way. That way, we can travel on a whole other level.

Michelle has had severe wanderlust since her first trip abroad at the age of 17 and doesn’t see it coming to an end any time soon! Michelle has traveled to almost 50 different countries and lived in Ireland for several years – hon the Premier County! A graduate of Boston University, she studied and interned in Paris while completing her B.S. in Journalism and a B.A. in International Relations. Since then, she has worked with international and U.S. students, both in the ESL industry and higher education. She is a library enthusiast, and when she’s not chasing her son around, can be found snuggled down with a good book and a giant mug of coffee.

Born in London, Layla Dworkin spent most of her childhood in Mallorca, Spain and moved to Barcelona to do a BA in History in the Universidad Autónoma. She specialized in Modern and Contemporary History and studied for a year in Italy, focusing on Cultural Studies at the University of Frederico II in Naples.

After finishing her degree, she earned an MA in Historic Culture and Communication in the Universidad de Barcelona, and an MA in Contemporary History in the Universidad Autónoma. She’s been working for over ten years designing and coordinating cultural and educational activities for many institutions, universities and museums of the city. She’s combined this job with a research project for the Democratic Memorial of the Catalan Government (parts of which were published in Sapiens, Catalonia’s leading History Magazine).

Most of her work has been centered in the History of Barcelona, especially the 19th and 20th century from an interdisciplinary approach. Prof. Dworkin has led groups all over Spain and parts of Italy.