My name is Dana and I am a Linguistics/Japanese extended major at the Metropolitan State University of Denver in Denver, Colorado. Currently studying at Kyoto University of Foreign Studies in Kyoto, Japan. My main goal in life is to become an expert on Japanese linguistics. If I can be fluent in Japanese, that’s all the happiness I need.

The start of my Japan Dream

Coming to Japan was a big deal for me. For years and years, before I was able to come here, I had longed to travel to Japan in order to learn the language. I had taken Japanese in high school, and that was a very formative period in my life. That is definitively when I fell in love with the language and decided what I should do with my life, and my sensei (teacher) of that time is still someone I hold in high regard in my memory.

When I was struck with severe depression due to a traumatic event in my final year of high school and almost quit attending school entirely, failing my Japanese class was one of the hardest blows that my ego had received. To this day, seven years later, I still feel guilty about failing that class.

Major depression is something that has negatively impacted my life for the better part of a decade at this point. In the years after graduating high school, I was eventually also diagnosed with PTSD and bipolar disorder, and I struggled a good deal with severe anxiety that kept me from performing basic socialization tasks. For years I existed in a limbo; never leaving the house, eventually landing seasonal part-time jobs that I worked on and off before I tried, and failed, and tried again to go to community college. My life was stagnant and making no progress. Due to the aftermath of the aforementioned traumatic event, my life had been put on a seemingly never-ending pause, and I soon found myself in my mid-20s and directionless; older than my former peers and feeling like I was running out of time to restart my life. I was miserable, unhappy, and had no real desire to live. These feelings conflicted with the desire to improve my life and my situation, to get my health under control so I could function as a normal, healthy person in society, and to finally go to and keep myself firmly rooted in college, so I could hopefully work in a field that would allow me to use my life’s one love: the Japanese language.

I was picky about where I wanted to go to college. I got a lot of general studies out of the way during my on and off time at community college. However, because I wanted to major in Japanese, my school options were limited. Of course, going to college in Japan was something I had my eye on and it was something that I had an insatiable thirst for. Nevertheless, due to finances, I settled with what was readily available to me, so I began attending a proper university, officially, finally, in January of 2018 at the age of 24. I could continue studying Japanese after so much time out of the classroom and studying by myself on my own time, I could customize my major to sprinkle in my other interests to something that was more tailored to my personality, my grades were near impeccable for the first time in years, everything was going great.

However, I was still unhappy. I still didn’t have quite what I wanted. I wasn’t in Japan.

What prompted me to go abroad

I applied to CIS Abroad on impulse in the middle of a major depressive episode (which, in retrospect, was irresponsible and I am glad that at the very least I had the resources to do so at the time). I applied on impulse because of how unfulfilled I felt in my Japanese studies. As grateful as I was to be in Japanese classes at long last, something was missing. I wasn’t learning enough. I didn’t have immersion. That’s what I really wanted—complete immersion.

I have to go to Japan. It’ll be the only way for my Japanese to actually be good.

And so, long story short, I came to Japan basically on a whim and I’m so glad I did. The irrationality of depression and the simple fact that I have bipolar disorder means my moods have and still do fluctuate wildly, so even in the months and days leading up to finally getting on the plane, I was still flip-flopping between anger, irrational sadness, and suicidal ideation for no real reason other than that’s what my brain wanted to do. The day I actually arrived in Japan, though, will probably go down as one of the best days of my life. When I could see the landmass of Japan slowly come into view, I felt a profound feeling of joy well up deep within my chest because it felt so unreal.

After all those years, I’m finally here, was my thought. This is where I can start over.

Studying abroad is not a magical treatment Being in a foreign country has a honeymoon period. Mine lasted for maybe a month and a half. At first, everything was new and amazing and I realized how bad my Japanese was. But I didn’t care because I was here and I could practice. I could study, and feel like I am finally alive. Kyoto, in particular, reminded me a lot of Denver because of the proximity of the mountains, so I really felt like I was at home here in Kyoto. I felt like I hadn’t gone far at all. Even now, I don’t feel homesick at all. Japan is the place for me, and I firmly believe that at this point in time. Eventually, study abroad becomes your daily life. You develop a daily schedule: You go to school, you go home, do homework, eat, sleep, then you go to school the next day. Repeat and repeat. The daily grind of attending class is the same no matter where you are, and that is what I began to feel after the mystique of Japan’s honeymoon period began to wear off. The depression came back. It made me miss some classes, just like back home. It made me angry and lash out for no reason, just like back home. It made me feel like dying again, just like back home. I never thought that coming to Japan would cure my problems completely, but when I finally felt settled into my life here, I began to feel like maybe no matter what I do, no matter where I am, I’ll always have that dark spot in my brain being ever persistent. That’s a bitter pill to swallow. I’ve lived with this for years prior and I’ll keep living with it from now, and that’s a pretty disappointing thought to have in the midst of fulfilling a dream.

How CIS Abroad has helped me

Living with omnipresent mental health problems is hard and frustrating. Disclosing these problems to my contacts at CIS Abroad and to new friends and acquaintances is also hard and scary. When it comes to CIS Abroad staff, though, the site directors are a neutral party and won’t do anything more than point us in the right direction. I felt very comfortable asking the on-site staff for help with utilizing mental health resources. It’s hard to work up that courage, but contextualizing CIS Abroad staff as extensions to getting help makes it a bit easier. The staff members are neutral, don’t judge or pry, and want to assist in making study abroad a great experience. Transparency and honesty about mental health are essential. CIS Abroad staff aren’t counselors, but they can help by recommending doctors, counselors, psychologists, etc. Sharing this information is really important, especially in the case of medication. If CIS Abroad knows beforehand if any prospective students have mental health struggles, both CIS Abroad staff and students can be more prepared because a dialogue can be opened in order to exchange information to make the most out of studying abroad while still being as healthy as possible. Study abroad can’t cure depression or other life problems. Family, friends, and doctors from back home are also inaccessible. Having access to mental health care even abroad has made me feel like I have someone to rely on at all times, and it has been immensely helpful.

Studying abroad in Japan gives me the strength to move on

Despite my ongoing battle with mental health that has no end in sight, I can definitively say one thing: I managed to fulfill one part of my dream by coming to Japan, even though  it was basically on a murky, depression-fuelled whim. I think my past self would be proud of me. Can I say that I’m happy? Honestly, no. Will I ever be happy? It’s hard to say. But can say that I am content, and I know that from here on out I can continue to take care of myself and I know that I can see myself returning to Japan in my future. As long as I have that to look forward to, I can make it through anything. I’ve persisted through hardship and the resulting depression until now, so there’s no reason why I can’t continue on persisting. 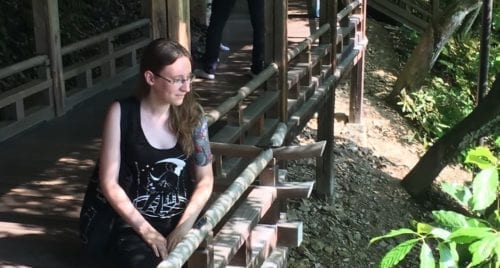 Read other blog posts from Japan or about Mental Health abroad!

Why Every MBA Should Intern Abroad | Intern Blog from Barcelona

Brianne found her internship in Barcelona vital to her graduate business studies. Read why she thinks every MBA should intern abroad. Read More

Spending a semester abroad has been at the top of my college to-do list since even before I started college. My mom instilled the travel bug in me since I was young and I knew it was something I had to take advantage of! But a semester to intern in Prague? That was something I […] Read More

3 Ways to Celebrate Christmas in Dublin | Student Blog from Ireland

3 Ways to Celebrate Christmas in Dublin It’s Christmas in Dublin and my time abroad is officially coming to an end! It’s crazy to think I have been here for three months. Although I will be sad to leave, I am incredibly thankful for the experiences I’ve had and people I have met here. […] Read More